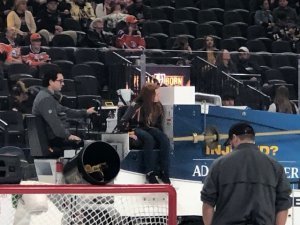 Connor McDavid and the Edmonton Oilers visited Las Vegas for a midweek matchup against the Golden Knights and we were able to give away tickets and a ride on the Zamboni to one lucky fan. After multiple attacks by the Oilers, the Golden Knights fought back and stole the early 1-0 lead. Max Pacioretty scored his 30th of the season giving his team the one-goal edge after the opening 20 minutes.

The 2nd was a back and forth defensive period. Each team was awarded a power play but neither could convert. Both goaltenders made some key saves to keep the game tight. After two periods played the Golden Knights held on to their 1-0 lead.

Newly acquired forward Nick Cousins gave Vegas a 2-0 lead with his first goal as a Golden Knight. Shea Theodore would later add to the lead scoring his 10th of the season. Marc-Andre Fleury continued to shut down the Oilers in the 3rd, preserving his 5th shutout of the season. Vegas tripled up Edmonton 3-0 for the final score.

Vegas’ record improves to 34-23-8 and remain in first place in the Pacific Division with 78 points. Next, the Golden Knights face off against the Buffalo Sabres on Friday night. Game time is scheduled for 7 pm

Your ticket for the: 2/26 Winner of Adam Kutner’s Ticket & Zamboni Ride Giveaway