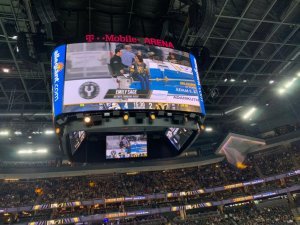 The Golden Knights hosted the Calgary Flames in a Pacific divisional battle. Both teams were in search of their third victory of the season.
Vegas jumped on the board first 3:24 into the game on Tomas Nosek’s third goal of the season. Both teams would trade power plays but neither would convert. The 1st period ended 1-0 good guys.
In the 2nd Calgary scored two quick goals to take the 2-1 lead. After settling down, Mark Stone tied the game with his third goal of the season. William Carrier and Paul Stastny added two more in the period to give Vegas the 4-2 lead after 40 minutes of action.
Golden Knights forward Ryan Reaves put his team up by three scoring his first goal of the season. All three fourth-line forwards scored for Vegas in their commanding 6-2 victory.
Vegas improves their record to (3-2) with a victory over Calgary. The Golden Knights will have a quick turnaround as they travel to LA to face the Kings tonight. Puck drops at 7P
Read more The Las Vegas Elks #1468 and The Law Offices of Adam S. Kutner & Associates and Adam Kutner Cares, wish to express our appreciation to you, our First Responders.

Please join us for this family-friendly, fun-filled day as we pay tribute to you and your service to our community.

Each first responder, their significant other and children will receive a coupon for a burger and fries. Free adult beverage of your choice. Live music by DJMark starting at 1:00 pm. Raffles, Cornhole, and an inflatable slide for the kids. The main lounge will be open for the duration of the event.

All first responders show your valid I.D. at the door for entry. Children are welcome.

Please come for an hour, two or all day if you wish and let us extend our hospitality and a big THANK YOU to each of you for all you do for us.

For additional info call Jennifer Bradley at: jenniferbradley@cox.net or Call: 702.234.9385 Your ticket for the: 9/29 Winner of Adam Kutner’s Ticket Giveaway