The Golden Knights gave up the first goal to the Capitals but quickly responded. Alec Martinez tied the game later in the period to make it 1-1 after the opening 20 minutes. After one, Robin Lehner was pulled in favor of Logan Thompson.

Alex Ovechkin scored the only goal of the 2nd period to give Washington a 2-1 advantage after 40 minutes.

Quickly in the 3rd period Evgenii Dadonov tied the game with his 20th goal of the season. Less than a minute later Chandler Stephenson gave Vegas the lead with a power play goal. Late in the period Washington tied the game 3-3 and forced overtime.

Known for his dramatics, Shea Theodore scored on beautiful individual play to win the game in overtime.

The Golden Knights record improves to 42-31-5 defeating the Capitals 4-3 at home. Vegas picks up two points and trails Dallas by two points for the final Wild Card position. The Golden Knights get a chance to add another two on Sunday night against San Jose. Puck drop for another must win game is set for 7 PM. It didn’t take long for the Golden Knights to get on the board as Keegan Kolesar fired home a nifty feed from Brett Howden. Vegas got numerous odd-man breaks through the rest of the 1st but couldn’t extend the lead past 1-0.

San Jose answered back early in the 2nd, but the Golden Knights responded with a classic Misfit Line transition goal by Reilly Smith. After two, VGK had only conceded 10 shots on goal.

Smith tacked on another one early in the 3rd on a beautiful play from Jonathan Marchessault and William Karlsson. From there, the Golden Knights clamped down on defense allowing almost nothing of danger the rest of the period.

The Golden Knights win their 30th of the season and earn Pete DeBoer his 500th career victory pushing their record to 30-20-4. Next up is an Eastern Conference foe, the Boston Bruins. Puck drop at T-Mobile Arena on Thursday is at 7 PM. 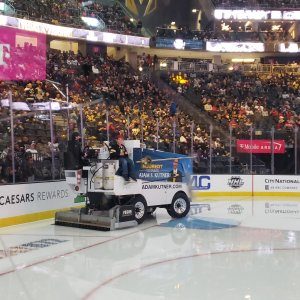 The Golden Knights looked to end their losing streak by hosting the LA Kings for their third of four matchups this season. Vegas’ offense started off hot scoring two goals in the 1st period. Top forwards Max Pacioretty and Reilly Smith gave the Golden Knights a 2-0 lead. LA cut the lead in half late in the period trailing Vegas by one in the opening frame.

The Kings evened the score :30 into the 2nd period with a power play goal. Pacioretty regained Vegas’ lead adding his second of the night. LA tied the game 3-3 late in the period and took the momentum into the 2nd intermission.

Both teams played conservatively and defensively in the final period. Neither team allowed any quality opportunities and the game needed an overtime period to decide a winner. LA took the two points with a beautiful passing sequence for the game winning goal.

The Golden Knights record drops to 28-18-4 falling to the Kings in overtime. Vegas hits the road for the next two games beginning in San Jose on Sunday evening. Puck drop is set for 5 PM.

Your ticket for the: Vegas Golden Knights vs Los Angeles Kings 2-18-2022